If you follow the news like I do, you’ve noticed that over the last couple of weeks, one topic has been dominating every news medium.

Well okay, three topics. But I’m ignoring IHOP’s free pancake day and Justin Bieber’s haircut. So when you cross those off the list, you’re really only left with the situation in the Middle East. 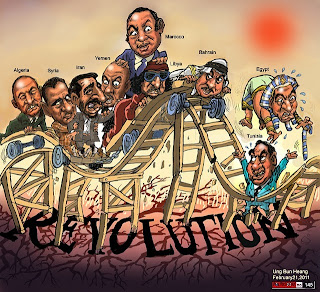 I think there are several lessons that we can take out of the turmoil in that region of the world. First of all, it’s worth remembering that rebellions spread faster than mono in a high school. One group of people fight for their freedom and win it, which inspires others to fight their own oppressors. Hence my belief that we should fight the tyranny of Dan Snyder. 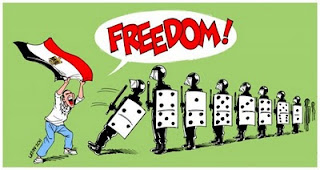 But unfortunately, there are some situations that peaceful resistance is futile against. Namely when you’re fighting a psycho with a lot of guns and money. Because as my dad always says, you can’t argue with crazy—crazy does what crazy wants. And in Libya right now, crazy is running the show and mowing down anyone who goes against crazy’s rule like they’re a British agency’s representative standing in front of a drunk secretary on a riding mower in the Sterling Cooper office. 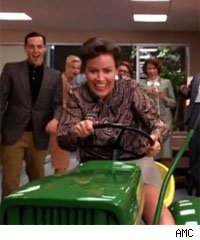 I know that I’ve spent a lot of time planning what the world will be like when I take over and rule with a well-manicured iron fist. But in the last few weeks, I’ve re-evaluated my stance on dictatorial rule. And while I hate to quote two of the most famous political assassins of all time (and apparently the t-shirt that Timothy McVeigh was wearing when he was arrested after the Oklahoma City bombing… it’s truly fascinating what you can learn on Wikipedia), I’m starting to see the logic in “Sic Semper Tyrannis.” When a tyrant refuses to step down and do what’s right for his or her people, it’s time to take action.

So for example, Oprah is an example of a good ruler. She led her people for many years, but eventually decided on her own accord to step down.

Although that may not be the best example. Because she just launched her own television network. Which could be seen as an attempt at actually extending her rule over an even wider population. And she’s stepping down now that I’m a published author without first selecting one of my books as her book of the month. I’m kinda mad about that.  But I’ll forgive you Oprah if you pick my book before you leave your show.  Seriously.  Call me.

Okay, new example. Hosni Mubarak put up a tough front, but when it came down to it, he stepped down rather than resorting to extreme acts of violence and a potential Civil War. 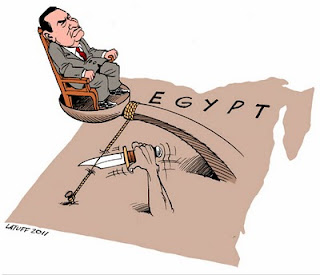 Unlike, of course, Dan Snyder and Moammar Gaddafi. But before we lean toward political assassination, it’s worth looking at the factors that caused these deadly dictators to rise to power. And if for no other reason, the US needs to learn that when we step into other peoples’ problems without a solid game plan and exit strategy, it doesn’t end well for us. We do great if we’re defending ourselves—I mean we showed our enemies who was boss in World War II. Because it definitely wasn’t over when the German’s bombed Pearl Harbor.

Vietnam and Iraq, however, gave us a little more trouble. Now in Dan Snyder’s case, military force is absolutely necessary on the part of the US, because it’s an affront that’s occurring on US soil. But in Libya, we need to tread carefully.

So why is Mr. Gaddafi so crazy? Is it something in the water? Has he gone mad with power? I mean, I know Lady Gaga would say he was “born this way,” but I don’t think that’s the case in this particular situation.

Because I understand this particular brand of madness. Better than most people can.

The problem is in his name.

What’s so wrong with his name? Easy. Spell it for me. 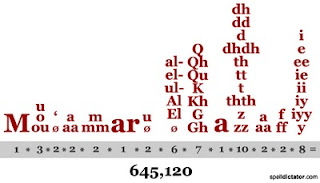 They’re not WRONG. They’re just not right. Because there is no correct way to spell his name in English.

And as someone whose name is spelled incorrectly on a daily basis, I understand the urge to go on a killing spree over a wrong letter constantly put in your name. I’m not going to lie. I’ve considered genocide against the people who can’t spell my name correctly when it’s right in front of them on Facebook or in my email address. Of course, I lack Gaddafi’s resources, so I’d be more likely to elbow someone sharply or step on their foot for screwing up my name rather than taking his route of ordering the military to open fire on crowds. But if you gave me military resources, I can’t promise I wouldn’t use them against the people who can’t be bothered to spell my name correctly. 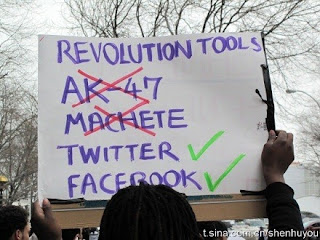 And the people who put leashes on their kids. But that’s a topic for another day.

Gaddafi, however, has way more of a reason to be angry than I do. Yes, I get annoyed when people put an “h” on my name. But he’s got it far worse. Because the English language just doesn’t have the right letters to express exactly how his name is pronounced. So every single English spelling is wrong. I was surprised when he first made headlines and I saw that his name was spelled with a “G” because I’d always heard it as more of a “K” sound. Which apparently is actually a little closer than the “G” that everyone is spelling it with. Because the closest approximation is “Qaddafi.” But Americans fear the letter “q” when it’s not followed by a “u” and therefore that spelling is an abomination to us. Which I understand. I always have a moment of panic on the first day of school if I see a name on my roster that has a “q” followed by a random second letter because I have no idea how to pronounce it without the “u.” 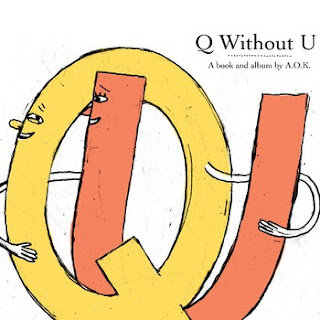 So what’s the answer? How do we appease the beast without leaving a mad dictator in power?

It’s easier than you might think. We just need to add a 27th letter to the English alphabet. We don’t need to use it for anything but Gaddafi’s name, and in fact we shouldn’t. We should make him feel special by giving him a Prince-like symbol for his name alone. 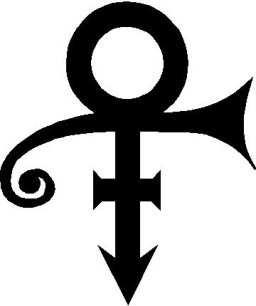 Then, while we’re distracting him with his own personal English letter like a carrot in front of a horse, we establish a real democracy.

But don’t worry. When I eventually take over the world, you won’t need to invent a new letter for me. Because it’ll be illegal to spell my name with an “h” at the end. Which, in the end, is what’s really important. My happiness. Get used to it people. It’s happening. But if you learn to spell my name correctly, when the revolution comes, you’ll probably be spared. Unless you’re a Cowboys fan. Or a Duke fan. Or Dan Snyder. Because some people just need to be stopped no matter the cost.